Here is the third installment of our October break trip to Australia! We started in Sydney, drove down the coast, and ended up here in Melbourne, which I absolutely loved.

We arrived in sunny Melbourne after leaving Lakes Entrance in the rain, so it was already off to a good start. We checked into our third and loveliest Airbnb with floor-to-ceiling windows that gave us views that reminded me just a little of New York – and made me realize that I miss it! The rest of the city did much of the same. 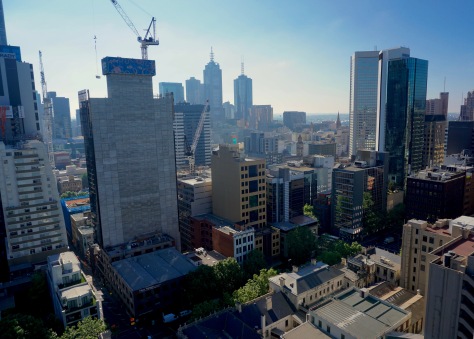 We ate a very late lunch and then began to wander, which is my favorite way to get to know any new place. I loved the hustle and bustle of the streets full of shops, people, and streetcars. I loved feeling neighborhoods blend and change. I loved being with so many people after thoroughly enjoying the exact opposite on the road. Many people were dressed head-to-toe in black, which we hadn’t seen elsewhere in Australia, and there were little alleyways and hidden streets with shops, restaurants, and cafés. Australia’s same-sex marriage vote was ongoing and there was pride everywhere, which was so great to see. It had been the same in beachy, chill Sydney but much more creative in bolder, grittier Melbourne.

Our first stop was the State Library of Victoria because we had read that it was pretty. And, truth be told, I adore libraries and don’t really need a reason to visit. I’ve waxed poetic about the NYPL more than once and still donate to them (because I just realized that I can still download e-books!).

Because libraries are the best, there was a free exhibit on the history of Australia since colonization and we thoroughly explored it. As in the Australian Museum in Sydney, I read everything in the exhibit and really enjoyed it because Australia’s history isn’t something I’ve ever formally studied. Outside the library, people were playing chess with giant chess sets. So cool! So community-oriented! 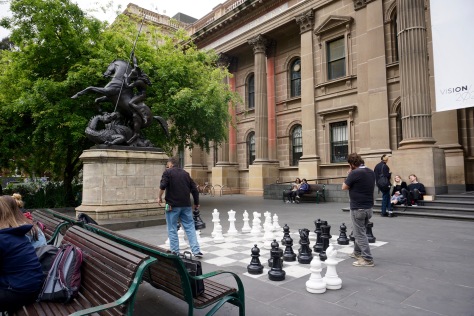 The next day was our only full day in Melbourne and I loved every moment of it. We spent the morning at Queen Victoria Market, though I could have been there for so much longer. I seek out markets in every country I visit and they’re always a highlight. Since I love fresh vegetables and seek out anything locally sourced and locally grown, I would have loved to buy produce and other ingredients to cook dinner. Alas, we’d made a reservation at a very hip, cool restaurant and I didn’t want to miss it!

I did, however, have the foresight to ask my friends to arrange a meeting place and time in case we get separated. I’m a kid in a candy store when it comes to markets (and bookstores and libraries) and envisioned wandering off. Self-fulfilling prophecy.

In addition to some cool local artists’ stands that I felt badly photographing without buying, Queen Victoria Market had a section for stuff . . .

. . . a section for produce and an entire building for perishable food items . . .

. . . and a bunch of restaurant and coffee shop stands. The picture below of the sign is specifically for my dad, who introduced me to (and perhaps invented) the word “under-caffeinated” many years ago. Caffeine, specifically from black coffee, plays a very important role in my family; claiming under-caffeination is the best way to get anyone to empathize when you’re having a moment or in a mood.

In the afternoon, we tracked down some of Melbourne’s famed graffiti streets, which we overheard a tour guide tell his group change almost nightly. It was really neat because nothing on these streets escaped the artists’ hand. There’s clearly a set of rules and norms that are associated with these streets and I’d love to know what they are. I didn’t see anything that could be considered obscene or anything that looked like it was encroaching on anyone else’s work. The streets seemed to be art, and respected like street art usually is, rather than graffiti, which sometimes seems more hurried, frazzled, and incomplete. I took a lot of pictures and narrowed down the list as best I could, but I really just want to share all of them! 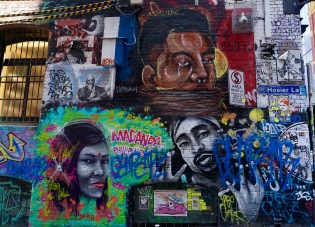 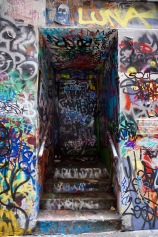 We walked along the quiet, still Yarra River that afternoon. It was the only hot day we had in Australia and there was a noticeable heaviness to the air that we hadn’t felt since Singapore.

It was a nice break from the noise of downtown but somehow left me itching to return to the flurry of daily living that was present in the city streets. No one else shared this sentiment, but I don’t mind being out and about alone. I found another pedestrian alleyway, this one full of open-air restaurants and bars, and sat down at a popping wine bar. I flipped past the wine list and promptly ordered a beer, sneakily munching on the granola I had in my backpack.

I people-watched and journaled for a good hour. Some of my best personal reflection has been while traveling because I consider travel as time just for me. And since I’m in new places, or at least places different from the everyday, I seek out new things that make me reflect in myriad ways. I usually don’t travel with cellular data and don’t seek out wifi, so it’s easy to remain in the moment. I generally don’t miss being connected, either. It’s nice to be able to sit and dream every now and then without feeling obligated to do something else or be part of something else.

Melbourne, you are a vibrant, energetic, and liberating place. Thanks for ending the week in Australia on such a high note.