Last week, I explored a tiny fraction of a huge country and I can’t wait to go back. Two girlfriends and I flew to Sydney and took a road trip south along the coast to Melbourne. We ate a lot of delicious food, drank excellent wine, and sang more than a few Disney songs. We laughed, took pictures, and walked everywhere we could.

The first thing I noticed upon arriving in Sydney was the weather. It’s spring in Australia right now and I was cold. I tend to run cold, which helps out in Singapore but is a detriment elsewhere. Feeling the fresh air of Sydney and being able to dress in layers and walk around comfortably undoubtedly had an impact on our positive feelings throughout the trip.

We started our Sydney adventure with a wander towards Circular Quay (that’s where the Opera House is) and through the Rocks, which was hosting a neat artists’ market. It was there that we first recognized the laid-back, beachy, relaxed vibe of the city. People everywhere were friendly and welcoming. There’s a certain calm, even in large groups of people, that reminded me of my trip to Southern California last December. The atmosphere felt like California, but the architecture and style reminded me a lot of New Orleans. We saw these wrought-iron balconies everywhere!

I rarely do any shopping when I travel and didn’t buy anything at the market, but did enjoy looking at everything for sale. Lots of good gifty things if you’re into that. Eventually, we made our way to Harbor Bridge, walked across it, and looked out over the water. That was my personal “must do” for Sydney and the view did not disappoint:

From the bridge, we followed the road around the harbor back to Circular Quay where we saw some really beautiful foliage and the bridge itself. I absolutely loved the purple trees! It was also fun to watch the sun begin to set, which happens later in the evening in Sydney than in Singapore. That was nice, too. 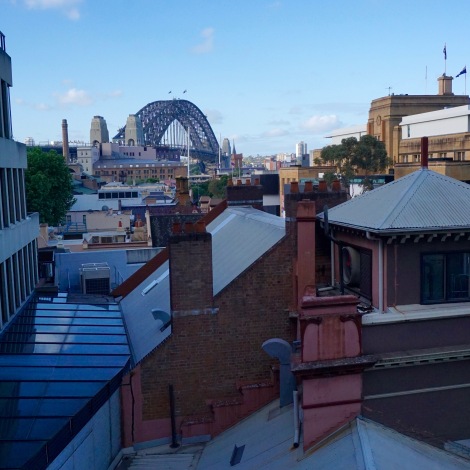 The following day started with a walk through Hyde Park, which made me laugh because that’s the name of the Chicago neighborhood where my family spent a year when I was very little. Hyde Park in Sydney was full of runners and bikers and is also the home to the Anzac Memorial. I first learned about Anzac from an Australian colleague in Malaysia a couple years ago; I’d seen a lot of war memorials but never one for Anzac.

Later, we made our way to the Botanic Gardens (walking through pretty areas with greenery was a theme of the trip), pausing at St. Mary’s Cathedral. The church itself struck me as odd because the architecture just didn’t seem to fit. But church architecture is church architecture the world over. I love identifying human commonalities because they act as a reminder that we are indeed similar, despite the very different ways that we interpret the world.

The Botanic Gardens, located across the harbor from Circular Quay, were really beautiful and a charming place to be on a Sunday afternoon. Like Hyde Park, they were also full of people. We saw more than one garden party complete with stylish hats. Legacy of colonialism, methinks! 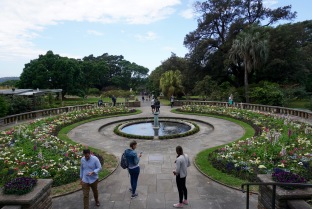 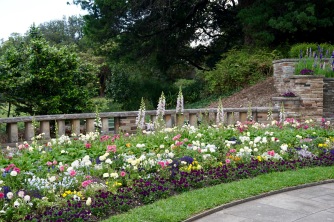 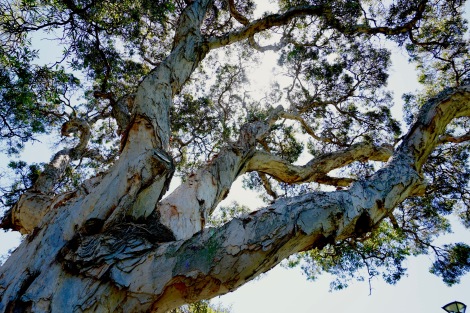 When it started to rain, we visited the Australian Museum where we were happy to learn about some of Australia’s history. We saw the same names repeated over and over on street signs as we traveled and I appreciated the sense of grounding that comes from knowledge, a glimmer of understanding of what makes a place what it is.

For our last full day in Sydney, we decided to take a bus out of the city (Opal cards for public transit work throughout the state of New South Wales – so cool!) and visit Bondi Beach to see Sculpture by the Sea, a really cool annual art show set in a beautiful place. Many thanks to the Uber driver who told us about it! The bus ride took us out of where we were staying in the CBD through parts of Sydney where real people actually live. It was nice to see regular neighborhoods and get a brief glimpse of their individuality and character.

As we knew it would be, Bondi Beach was beautiful and so was the weather, another theme of our trip. The sky really was that blue!

Sculpture by the Sea was a really engaging show because the sculptures were designed to fit into the landscape. It was a very enjoyable walk up along the rocks, admiring and trying to understand the art while looking down at the beach below. Admittedly, my favorite piece might not have actually been part of the exhibition. I didn’t buy the booklet with the information so I can’t be sure, but it was too amusing not to share. Please enlarge the photos below. I promise they’re not all the same!

We headed back to Bondi and took the bus through rolling hills that gave us gorgeous views of the Sydney skyline. I was tempted to suggest getting off but we didn’t really know where the stops were or when we could expect another bus to arrive. All we knew was that we were heading to the bus terminus at Watsons Bay, again on recommendation of the Uber driver.

Upon arrival, we found exactly what we were looking for: lunch and a nice spot in which to eat it. The pelicans (enormous birds – I had no idea!) thought so, too! 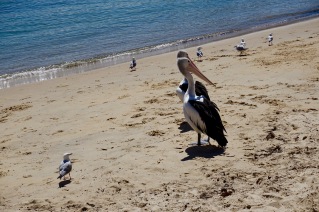 Again based on the advice of our Uber driver (goodness, we are trusting people!), we used our Opal cards to take the local ferry from Watsons Bay back to Circular Quay. I love boats and was so, so happy to spend about 20 minutes standing at the railing, taking pictures in between closing my eyes to absorb everything I could from the water, sun, and air.

In a poetic sort of way, our Sydney adventure started and ended in Circular Quay. That was the first place on our list of places to go and where we were heading when we got distracted by the artists’ market at the Rocks. It was also the last real “sight” of this part of the trip, with a sense of familiarity this time instead of awe. After all, new sights are only new once. (Arguably, they’re new again if you see them through someone else’s eyes, but that’s a different discussion for a different time.)

After three nights in Sydney, we embarked on part two of our Australia adventure. We rented a car and drove about 1,000km along the coast to see pretty places on our way to Melbourne!