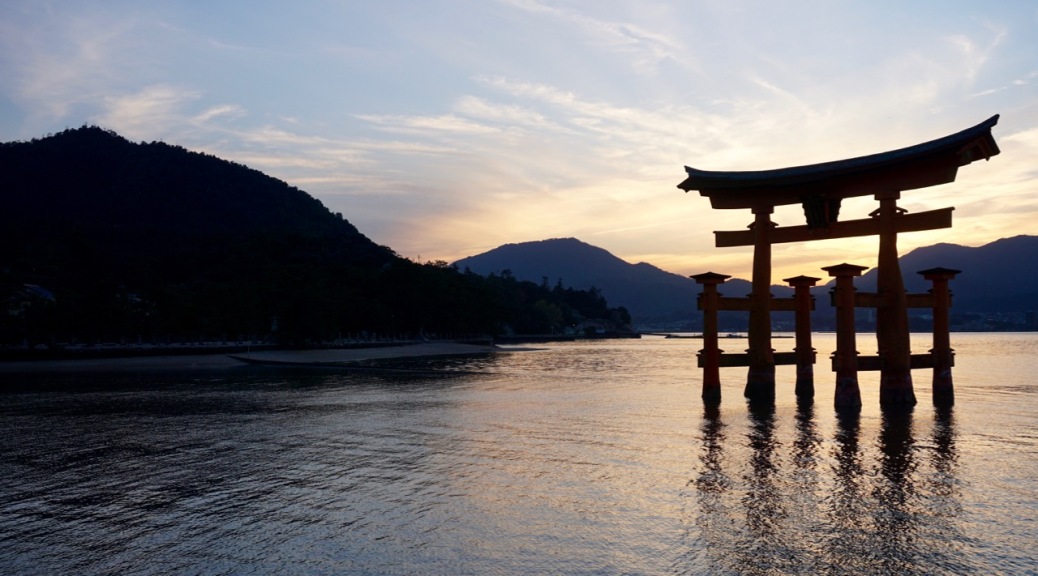 After my parents and I spent four nights in Kyoto and visited Himeji and Osaka while based there, we boarded an early shinkansen (bullet train) for Hiroshima where we spent two night. The train ride itself was easy and comfortable and we arrived in warm, sunny Hiroshima around late morning.

It was in Hiroshima where I met my new favorite Japanese dish, okonomiyaki. What a great and customizable way to eat all sorts of things! It was also in Hiroshima where the weather markedly improved, making for far more comfortable wanderings through town.

The main tourist attraction in Hiroshima is to visit the Peace Memorial Park and that was our plan for the rest of the day. I’m struggling with which verb to use to describe what it feels like to stand in that park and think about what happened there. To think about where we are now and whether we’ve accomplished anything at all.

What really got to me was not the Atomic Bomb Dome . . .

not the paper cranes of the Children’s Peace Monument . . .

and not the memorials scattered throughout the park.

What really got me was feeling of life throughout the park. Vivacity. The everyday living of everyday people. As we all are; as we all do. People were picnicking under cherry blossoms and I didn’t want to stop watching them. It makes so much sense to memorialize the 150,000+ people who died as a result of the atomic bomb by filling a park with beauty and life. Beauty and life, laughter and smiling children, families and friends. The park was a place for people to connect with others, learn about each other, and know each other.

The park was a peaceful place, a living memorial to lives lost. And maybe a sign that we have indeed accomplished something.

And Hiroshima really did parks beautifully. As the sun began to set we walked through Shukkeien, a charming garden built around a koi pond. We watched turtles move slowly from their perches on rocks back into the water and carp jumping to catch bugs in the air. I really enjoyed the moss covering the ground, which seems to be a feature of Japanese parks. Interesting, there doesn’t appear to be grass anywhere.

The next morning we took the ferry to Miyajima, an island populated by about 2,000 people and very friendly deer.

We spent the morning wandering the little streets full of restaurants and souvenirs shops . . .

. . . and checked out the temples and shrines.

The real attraction for me, though, was the hike up Mount Misen. I was very happy to be in the forest and in the sunshine. The climb was more challenging than I expected because it was mostly stone staircases heading directly uphill, but I was so happy to be in the air. It was good to feel my legs and lungs working and I peeled off layers and rolled up my sleeves as I went.

The view was spectacular . . .

. . . and I cannot deny that the shrines were lovely.

I was basking in the feeling of the climb as we sat at the Miyajima Brewery before dinner. Looking down to the beach we saw locals digging for clams.

Friends had told me that it was important to stay until the sun went down and there was no question that we would. The pink sky over the torii gate quietly closed a day spent outdoors by the sea.

Our time in Hiroshima and Miyajima was a restful couple of days in a beautiful place and we left for Tokyo the next morning relaxed and refreshed. Stay tuned!