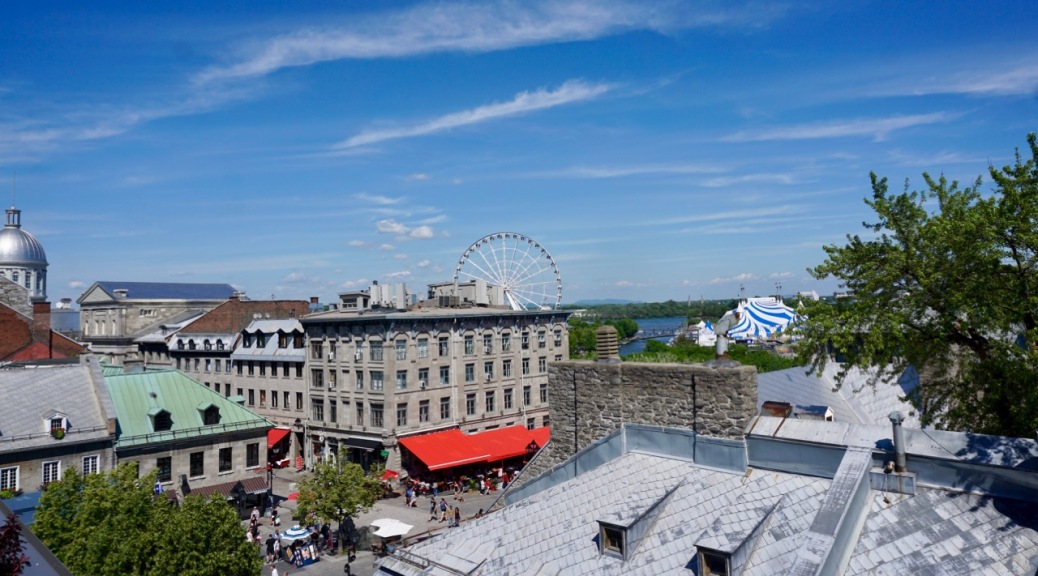 During the annual summer trip to see our grandparents, my siblings and I had the chance to do a little exploring. My sister and I were born in Montreal but we moved when we were very young. We’ve been there somewhere around a million times to visit family but have rarely seen or experienced Montreal as a living, breathing city. It was great to have a chance to do so this time!

We spent our first afternoon in Old Montreal, charming with old buildings and architecture that makes it feel more European than particularly Canadian. French and English heritage are obvious in the signage, statues, and bustling activity of restaurants and sidewalk cafés.

Old Montreal is especially busy during the summer when the weather is warm and festivals are in full swing. (We were really excited to accidentally find ourselves at the Jazz Festival a little ways away!) There were street vendors selling everything from ice cream to jewellery and it was fun to look around. The restaurants were crowded with people enjoying the sun, and everyone we met was friendly and helpful.

As with many old cities, Montreal is located on the water. The Port of Montreal was full of people riding bikes, eating snacks, shopping for souvenirs, and celebrating Canada Day.

The Port of Montreal even has its own flag, which unfortunately didn’t photograph as well as I would have liked.

We had dinner as a family to celebrate my grandparents’ anniversary. It was so normal – grandparents, uncle, aunt, and grandchildren all in one place! – and spent the evening laughing as our grandparents reminisced about their 61 years together and the spaghetti dinners they used to buy for 69 cents. 69 cents!

After breakfast the next morning, we the children went off to Jean-Talon Market where none of us had ever been. As you know, I love markets anywhere and my travelling companions felt the same way. We loved the fresh and local produce . . .

. . . and speciality shops and prepared foods.

There was even a cookbook bookstore!

I would have loved to do some shopping and cooking but we had other plans for the day and they were not to be missed. Rather than eating at the market we headed for Schwartz’s, a Montreal institution located on the popular Saint-Laurent Boulevard not too far from McGill University. In my limited excursions around Montreal, I’ve been to Schwartz’s more than a few times, which should indicate its prestige in the eyes of my family. They serve smoked meat sandwiches on rye bread with mustard and various sides like fries, coleslaw, and pickles. And that’s about it. (The Wikipedia page has a bit more information.) After waiting in the ever-present line out of the door, this vegetarian even ate half a piece of smoked meat!

We spent the rest of the afternoon continuing our walk through the neighborhood between Schwartz’s and McGill. We visited campus and then followed the street art through the main shopping area of downtown. Like markets, I love street art anywhere in the world and it was fun to get a sense of the cultural life of Montreal.

I was also very excited to see signs of community engagement in the painted piano sitting out for anyone to play and a very cool ground mural marked with the best spot for a photo.

Considering how little time I’ve spent in the city of my birth, it was really lovely to do some exploring. I got a sense of the city’s geography and can now better understand the streets that my grandparents and parents mention in conversation. I was able to practice a little bit of French and enjoyed being somewhere simultaneously a little bit familiar and quite a bit new. And, of course, it was great to see my family. It always is.