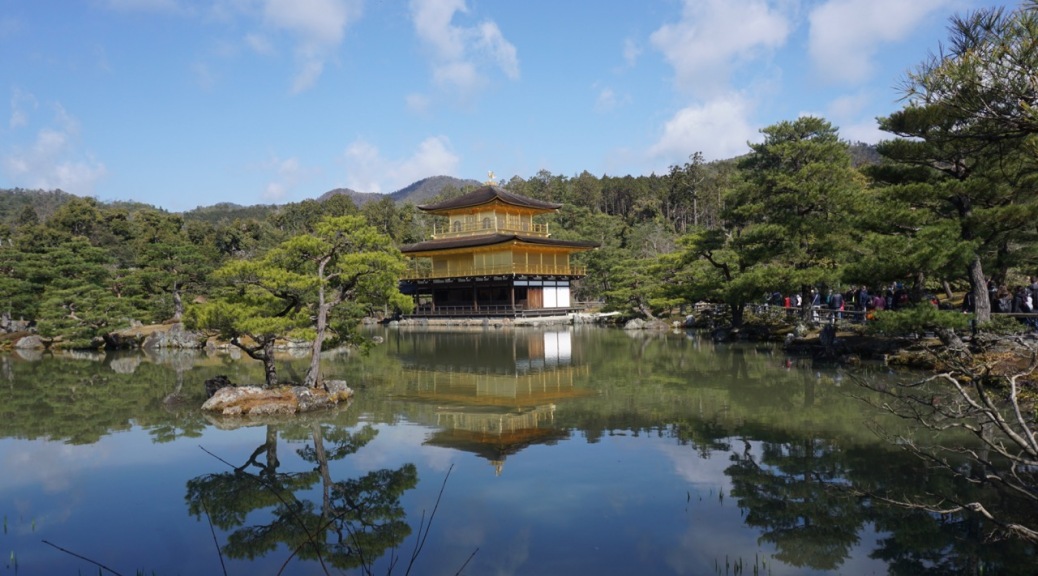 April is cherry blossom season in Japan and it’s as beautiful as everyone says. April is also early spring, which means the weather is highly variable. Umbrellas and layers were key to feeling comfortable wandering around Kyoto, Japan’s Imperial capital beginning in the 8th century. It remained the seat of power in Japan for over a thousand years and historic monuments, shrines, and temples abound. Renting a kimono for the day is a common activity in Kyoto and it was fun to see people dressed up – almost like going back in time!

This was my first trip in Asia with both parents and it was a fully immersive experience. (Dad and I went to Thailand and Vietnam a few years ago when I first moved to Singapore.) We took the shinkansen (bullet train) from Tokyo to Kyoto immediately after we landed and that made for a long day of travel; we were glad to finally be there!

We settled in and then went to Arashiyama Bamboo Grove, which was beautiful in the rain. The sound of the trees and smell of the earth was a lovely change from urban life in Singapore.

The next morning was sunny and we started early at Fushimi-Inari, a Shinto shrine known for its red torii gates. Fushimi-Inari is guarded by foxes and statues of them are located around the mountain. It was a beautiful walk and felt other worldly, as though passing through each set of gates was a doorway to somewhere else.

The view on the way up was stunning, too.

My dad wanted to visit Tofukuji Temple because he’d read that it has beautiful gardens, which I’m sure it does once spring actually blooms. But trees were budding and the ground was covered in moss and that was good enough for me.

From there, we went to Nishiki Market, a covered arcade of streets selling all sorts of food products, clothing, and souvenirs. I was mostly interested in the food stalls and we returned a couple days later to explore further. It was so enjoyable to smell new smells, taste new tastes, and just look around. Markets are always a travel highlight for me because they bring so much life there in so many different forms.

We ended the day wandering through some lovely streets with little shops and visiting Kodaiji Temple. The gardens around the temple included a bamboo forest and an exquisite cherry tree in full bloom, which was definitely the main attraction.

I really appreciate how Japanese gardens are sculpted and landscaped but not manicured. It makes them lovely in a very believable way.

Among the many nice elements of traveling in Japan is the convenience of trains. The Japan Rail pass allows foreign tourists access to most of Japan’s trains (like the Euro Rail Pass) and trains don’t require reservations. They are also very clean and extremely timely and comfortable!

Kyoto is an easy base for day trips and we took one out to Himeji Castle, Japan’s largest castle and one of very few that have remained intact. I was really glad that we opted for the guided tour. The tour guide was knowledgeable and friendly and more than made up for the lack of signage.

From there, despite the chilling rain that had begun to fall, we got back on the train to visit Osaka where we hoped to spend the rest of the afternoon and evening. Mum and I walked around the moat of Osaka Castle (Dad got a little lost or left behind – long story), occasionally putting up our umbrellas for the rain that alternated with patches of bright sunshine.

When it began to hail, however, we realized we needed another plan. After battling the driving rain and wind to get to the train station we returned to Kyoto and sheltered indoors to dry off. Not all plans work out and travel is an adventure, right?

Our last day in Kyoto was the nicest we’d had and I’m especially glad it was sunny because we went to Kinkaku-ji, a Zen Buddhist temple, and it was utterly stunning.

We walked to a pretty shrine surrounded by a garden of cherry blossoms and food stalls on our way back to the center of town . . .

. . . and then spent the rest of the morning in Nishiki Market where I took most of the photos above. From there, we visited the Kyoto Museum of Traditional Crafts, which was informative as well as free! It was useful in explaining much of the handiwork we’d seen and some of Kyoto’s history, particularly in terms of the geisha culture that still exists in a much smaller form.

After dinner in Gion, Kyoto’s most famous geisha district, it was time for one more sleep before boarding an early train to Hiroshima.

We had experienced all kinds of weather, tried new food, visited beautiful places, and were excited for something new. Stay tuned!

3 thoughts on “Travel Guide: Kyoto and Around”