This trip was a bucket list item for me. I wasn’t able to visit Siem Reap and the Angkor temples while I was in Malaysia and there was no way I was leaving Singapore without having that experience. I’d been hoping to visit the temples while in Cambodia in February with the grade 10 students (my post about that trip is here) but that didn’t happen. So, armed with what I’d learned about Cambodian history and culture, a water bottle, and a camera, and accompanied by my friend Rachel, I visited Siem Reap and the Angkor temples over our long weekend for Good Friday. If you’re unfamiliar, take a look at this useful page from UNESCO.

I cannot emphasize that enough. As we experienced in Battambang with the kids, the Cambodian people are friendly and welcoming and excited to share their culture with foreigners. Our hotel organized a tuk tuk driver who collected us from the airport, gave us a brief historical overview of Cambodia, and then drove us around the temples the following day. Kina was able to answer all of the questions that we had and constantly made sure that we were happy and comfortable. The food in Siem Reap was delicious and cheap and very vegetarian friendly – we even ate at a vegetarian restaurant our first night in town! It is so much fun to  be able to order literally anything off a menu! (Is this how other people feel all the time?!)

Siem Reap has similar markets to elsewhere in Southeast Asia and we did a fair amount of browsing, as well as some solid purchasing. There are a number of social enterprises and NGOs around Siem Reap (I’ll reference my Battambang post again), which meant that I bought a bracelet, wristlet, dress, and a few birthday gifts in order to show my support. Yes, that is my story and yes, I am sticking to it.

But onto the important part and the entire purpose of this trip: Temples.

Everyone I talked to and every guidebook says it is worth it to visit Angkor Wat, the largest and best known of the temples, at sunrise. That meant waking up at 5, meeting Kina at 5:30, purchasing our temple pass, and eating breakfast while waiting for sun to come up. Unfortunately, the haze is slowly returning and we did not see the stunning sunrises that appear in every advertisement for Angkor Wat. But it was beautiful all the same.

I would still recommend visiting the temples at sunrise because it was rather cool and pleasant out and there were relatively few people. As the day went on, it got much hotter and much more crowded. Kina told us to spend three hours at Angkor Wat and we did. We left just as everyone else was arriving (at the very late hour of 9:30am).

Kina did not walk around Angkor Wat with us, and Rachel and I agreed that it was easier that way. We’d done some pre-reading in her guidebook the night before and I’ve taught about the Khmer Empire in the past so we were happy to simply explore and enjoy the architecture. We climbed up many flights of stairs, modern but not up to Western safety standards, and were able to look down on our surroundings. I could not stop taking pictures! It’s taken me three nights of editing and curating to even get to the point of writing this post. 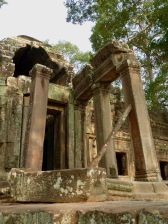 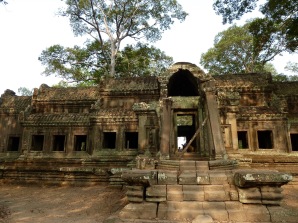 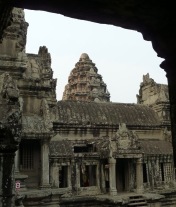 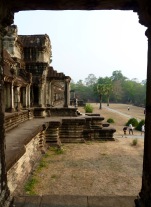 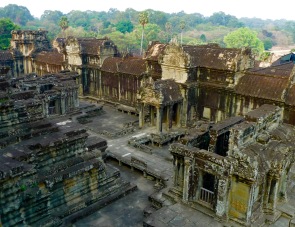 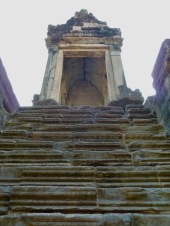 The painted stone, carvings and motifs, and sheer size and scale of Angkor Wat all took me by surprise. I was utterly delighted with the beauty of the stone, with its solidity and sense of permanence; I must have said “Wow” a hundred times. The intricacy and detail that went into the design of the temples clearly indicates the care, hopefully love, and presumably desire for power that are all part of Angkor Wat. Spending time among Khmer history, culture, tradition, and temples still standing after 1,000 years made me wonder about what we build and create today. Will our structures be standing in 1,000 years? Will our writings, digital as they often are, remain for future generations? 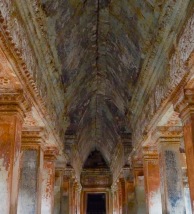 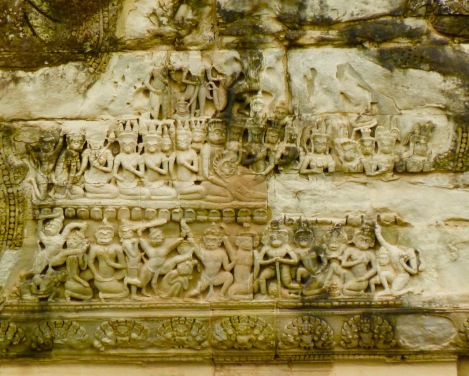 Again, I did not understand the scope and scale of the temples at all. They are massive and stretch over 400km, which I didn’t realize until we arrived.

After our three hours at Angkor Wat, we met up with Kina and he took us on a short drive to Angkor Thom.

Kina gave us two hours to wander through the Angkor Thom complex. We encountered even more and steeper stairs than we had previously and the weather was a lot sunnier and a lot hotter. There were also a lot more people. The most amazing part about Angkor Thom for me was the well-known Bayon temple, also known colloquially as “the faces temple.” I loved that each carved face was different. It actually felt like there were eyes looking down on us as we gazed up at them. It was sobering, in a sense, to be surrounded by people and feel pierced by stone eyes that are 1,000 years old. The sheer size of the faces was once again a surprise. 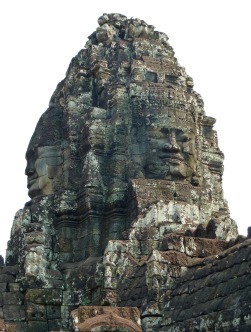 And, of course, the colors and symbols were beautiful:

The other temples at Angkor Thom are less famous than Bayon, but similarly beautiful. Lots of climbing here, too! 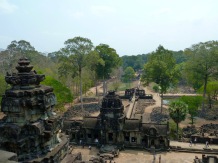 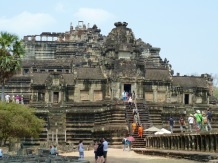 Our walk through Ankgor Thom to find Kina gave us a little taste of what we would see later at Ta Prohm. 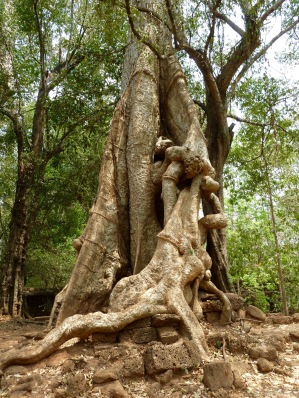 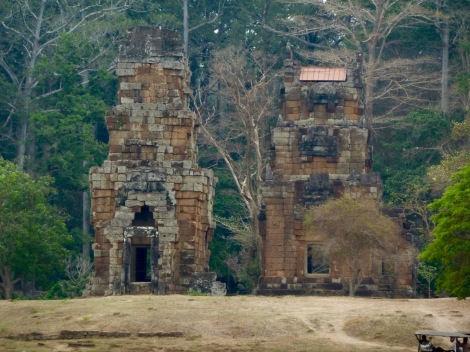 Our third and final temple was Ta Prohm, better known as the Tomb Raider Temple. As in the movie. With Angelina Jolie. We ended up had dinner at a restaurant called the Red Piano, which Ms. Jolie apparently frequents when in town. Naturally, we each sampled a Tomb Raider cocktail. Rachel lucked out and got a free one (presented to her with the loud ringing of a bell) because every tenth Tomb Raider at the Red Piano is free!

It was hot by the time we made it to Ta Prohm and we were tired. We discussed heading back to the hotel to cool off and relax (remember that we’d been up since 5am) but neither of us felt like we’d be excited about returning to the temples the next morning so we decided to just go for it. This would be the biggest advantage of a three-day pass, I think. Plan on getting up early, going to temples for a few hours, and getting to bed early that night. Temple fatigue would likely not come on as strongly that way.

Ta Prohm was really different from Angkor Wat or Angkor Thom because of the trees. It’s quite overgrown and really does have a very creepy atmosphere as a result. We walked through Ta Prohm much more quickly than the previous temples but did enjoy the massive trees growing up and over the stone. 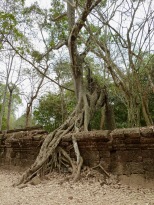 We actually made it back to the tuk tuk before Kina who had not suggested any sort of time guidelines for Ta Prohm (he was spot on with the other two). I expect we were there for roughly an hour. Kina tried to talk us into seeing more temples that afternoon but we were rather done by that point. Sitting in air-conditioning for a while and getting something to eat were tempting propositions.

We succumbed to temptation and it felt great.

Here are my general recommendations if you’re planning a trip:

There are a few entry pass options for visiting the temples. We bought the one-day pass for $20. You can buy a pass after 4pm for the following day if you’re so inclined. We knew we would only be there for a maximum of two days so there was no financial incentive for us to buy the three-day pass, which is $40. As I mentioned above, if you think a few hours over a few mornings will work for you, buy the three-day pass. It is substantially cooler in the mornings (as in, I was a bit chilly in my t-shirt and leggings when we left the hotel and couldn’t even remember what chilly meant by the time we got back) and a lot less crowded. I believe there’s also a seven-day pass available.

I normally don’t mind traveling alone, but I was particularly glad to have Rachel with me for this adventure. She’s a wonderful photographer and it was fun to follow her around to see how and what she photographed. I also really enjoyed sharing this experience with someone else. As much as I do enjoy solitude and personal reflection every so often (see the post about my trip to Ubud), I think my time in Siem Reap and visiting the Angkor temples was so delightful because I was able to point out what I thought was cool, hear what someone else thought was cool, and just exclaim aloud. It gets a little weird doing that alone. Rachel and I laughed and talked all weekend long, which is exactly how I hoped to spend my three days away. I came back to Singapore feeling happy and rejuvenated, which is precisely the point of a holiday.