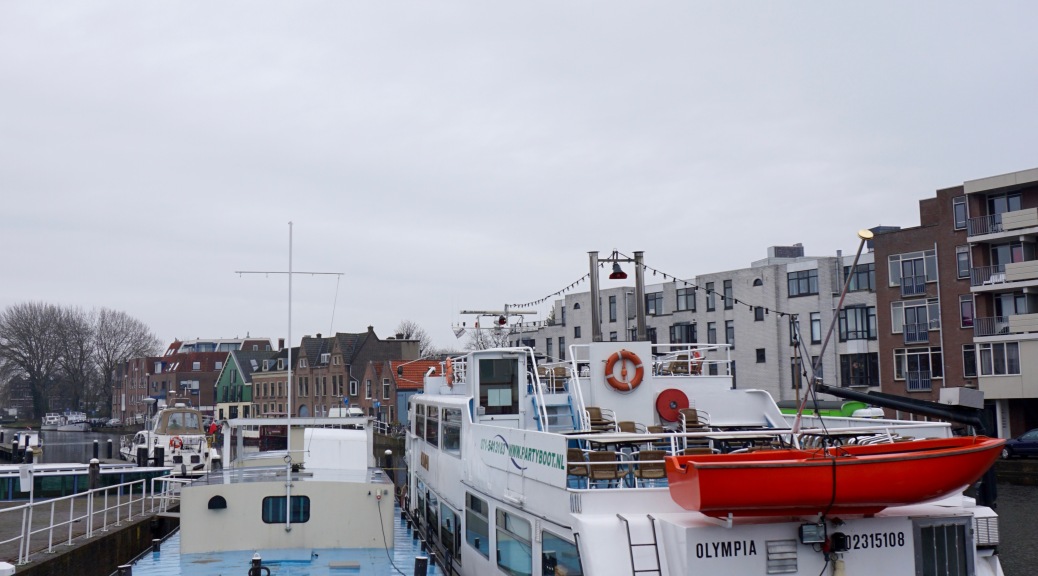 For spring break this year, I exchanged the heat and humidity of Singapore for the drizzle and early spring chill of the Netherlands and Belgium. The reason for the trip was ostensibly to meet my brother studying in London, but the first four days were solo travel days that took me to a new town (or two) every day. I haven’t traveled alone in a while and was struck, as every time, by how peaceful it is to be anonymous in a new place. A much-needed calm settled over me when I arrived at Singapore’s Changi Airport and I held onto it.

The twelve-hour flight from Singapore to Amsterdam was a red-eye, which meant I arrived bright and early the same morning I had left. Though exhausting, time traveling can be quite useful! I immediately boarded a train for quaint, beautiful Leiden, about 35 minutes southwest of Amsterdam. 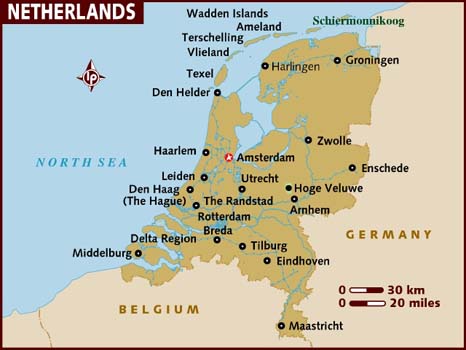 After asking directions in Leiden (I’m one of those rare people who doesn’t travel with cellular data, which likely contributes to the calm I experienced) I took a bus to my Airbnb. My host had agreed to let me store my backpack for the day and I forced in my contact lenses only because it was drizzling outside, as it would off and on for the next five days.

My plan for the day was to take the train about 20 minutes south to The Hague because I’d read that many attractions in The Hague are closed Mondays, the next day. (It didn’t occur to me that said attractions would also be closed Easter Sunday, but that’s because I didn’t realize it was Easter Sunday.) This time, I walked through Leiden to get my bearings on the way back to the train station. I loved everything I saw and thoroughly enjoyed wandering through the town for the two days I was based there. 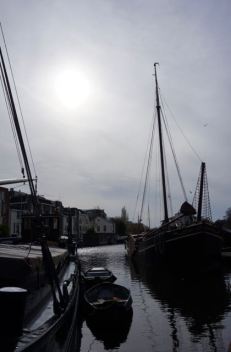 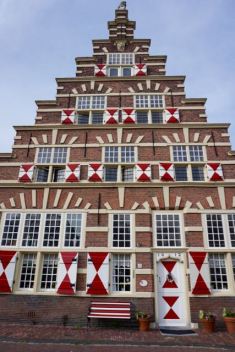 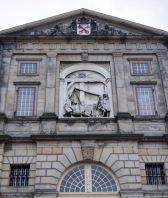 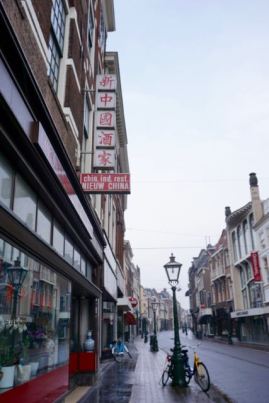 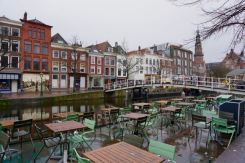 It was raining when I arrived in The Hague, the world’s center for peace and justice. For that reason alone, I was glad to be there. I found a cool little market and bought a new thumb ring (I’m always on a hunt for rings) . . .

. . . before making my way to the Mauritshuis, an art museum of Dutch masters that houses Vermeer’s Girl with a Pearl Earring.

Just like in Leiden, though, I was mostly content to wander the streets and see what there was to see. Many restaurants and shops were closed for Easter so the streets were quiet and fairly empty. 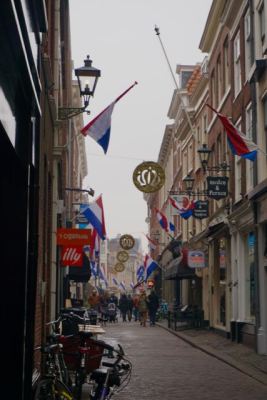 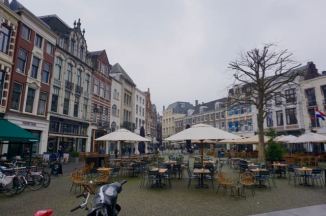 I was excited to visit The Hague because of my interest in peace. After having coffee in a restaurant that sources surplus food from distributors, I walked through streets lined with consulates from every country to the Peace Palace, open despite Easter.

The free audioguide tour of the visitors’ center provided an excellent overview of the world’s history and interest in peace. It also mentioned recent concerns in international diplomacy (of which there are many) and specific cases that had gone to the International Criminal Court located down the road. I particularly loved the World Peace Flame in its little garden and the focus on global interdependence. Call me hopelessly idealistic, but these are things that make my heart happy. 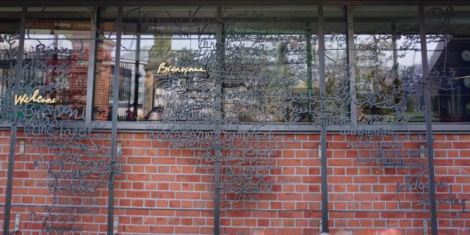 Dutch food also made my heart happy. Coffee and cheese everywhere were delicious and, in the latter case, far less expensive than anything I can get in Singapore. I snacked on poffertjes while in The Hague before returning to Leiden for dinner. I ate at a pancake restaurant that had been around since 1907 and had my first of many local beers. Again, better and far cheaper than what we get in Singapore.

Before returning to my Airbnb for the evening, I let myself get a little lost as I wandered through Leiden. Without knowing it, Leiden was what I pictured when the words “quaint Dutch town” floated across my mind. Only a few outer streets were open to cars, giving the town the distinct feeling of being built for people rather than merely accommodating them. The alleys I walked through led me to a flight of stairs at the old fort . . .

I managed to keep my jet lagged self awake until the very reasonable hour of just before 10pm. The next morning, my Italian host who had lived in Leiden for five years made a lovely breakfast and sat with me to have her coffee. Despite her two cats, our mornings chatting were a real highlight of my week and a prime example of why Airbnb is a cool thing to do. I spent that day in Leiden mostly taking pictures and stopping in cafés to get out of the rain, which, like the previous day, let up in the late afternoon.

. . . accidentally found the church of the Puritans who fled England for the Netherlands before departing on the Mayflower to North America . . .

I quite enjoyed photographing Leiden’s old signs and the poetry of many languages that had been painted on buildings all over the city. I could happily live in this town, was a thought on my mind every day in every place. 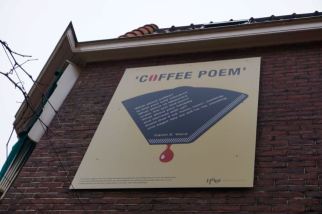 In what sounds like a joke but is completely true, I dropped the lens cap of my camera into a canal before taking yet another picture of boats and tall, skinny houses. There was nothing to do but shrug and walk a lap around town looking for a camera store. Unsurprisingly, I didn’t find one and instead had a glass of wine in a basement wine and cheese shop just in front of where my lens cap had floated away.

Everyone I met throughout the Netherlands was extremely friendly and helpful, which is always good when one is new to a place. Drivers stopped at crosswalks and waved pedestrians on. Workers in shops and restaurants greeted customers with a smile and seemed genuinely happy to be of service. Each city I visited was also very well marked for tourists with signs and city maps pointing the way to various attractions. I loved the Dutch lifestyle of bicycling, recycling, and supporting fair trade products.

After breakfast with my host the next morning, I was back on the bus to the train station. It was quite an adventure getting to my next destination, Brussels, but a lovely, quiet couple days had me in a state of equanimity that made it impossible to feel upset. Leiden, you’re a good little place. Thanks for having me! 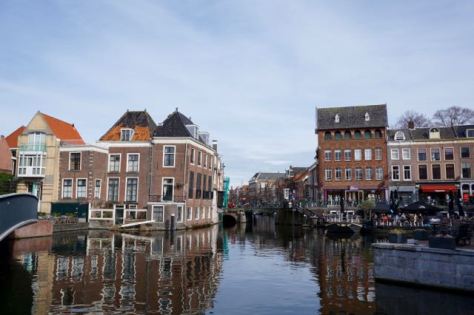 4 thoughts on “Travel Guide: Leiden and The Hague”