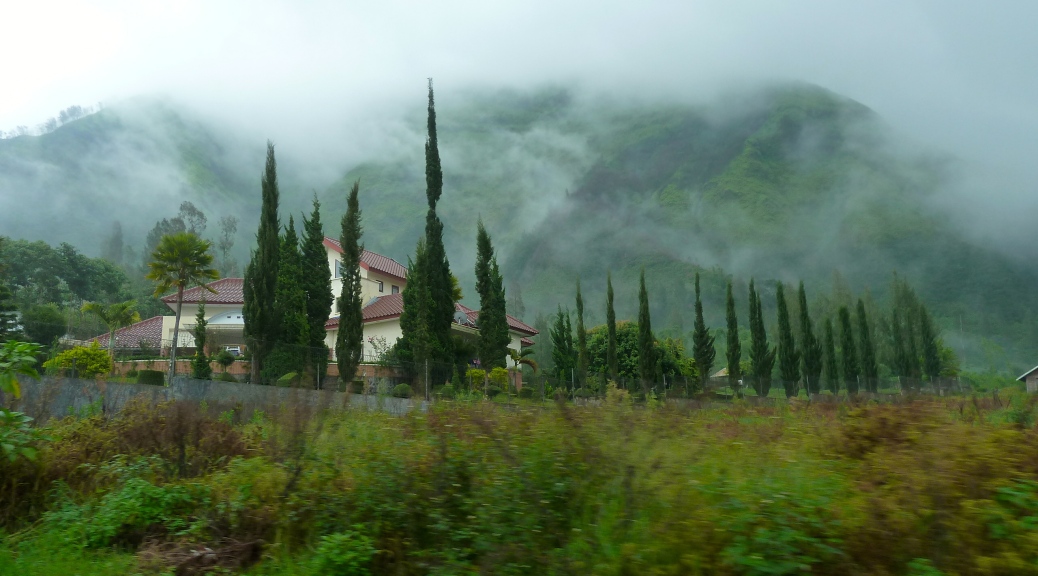 I turned 25 at the beginning of January and Mitch took me to Surabaya, on the Indonesian island Java, this weekend for my present! This was a very short trip for me. I landed at 8:45pm Friday night and flew out at 12:10pm Sunday afternoon. My flight was originally scheduled to leave at 5pm so I was supposed to have all of Sunday in Surabaya, but AirAsia cancelled my flight and moved me to the earlier one. Ah well, such is life and such is travelling on discount airlines. Nevertheless, we had a wonderful day on Saturday!

Indonesia is laughably cheap, which should also tell you how poor of a country it is. As a result, though, we stayed in a gorgeous hotel with a stunning pool, ate decadent food, and hired a driver to take us up to Mount Bromo, an extinct volcano. Seeing the volcano was the reason Mitch chose Surabaya as the place to visit.

Shots of our beautiful hotel in which we had a king-size bed, delicious cocktails, and ordered room service as a snack:

Unfortunately, I saw basically nothing of Surabaya itself. From sitting in traffic, I can tell you that it’s very dense and not walkable, at least not where we were. The driver on Saturday told us that West Surabaya is the expat area with the international school, so maybe it would have been different over there. We did see lots of cool graffiti, though! This is the only example of which I managed to snap a decent picture from the car:

Saturday was a dreary day, as all of the photos suggest, but the rain didn’t start until about 3 hours into the 3.5-hour journey up to see Mount Bromo, located on the Tengger Caldera. We had been warned that it was not a good day to try to see Bromo, but that’s what we get for traveling during the rainy season. The best time of day is supposed to be sunrise and even there there’s a 50% chance of clouds and rain. We figured we’d make do with what we had to work with and I’m really glad we did! Even though the drive was very long, we got to see a lot of Java that we wouldn’t have seen otherwise. The diver was very knowledgable and friendly, making for a pleasant and educational journey. He drove past the zoo so we could see the iconic statue of an intertwined shark (sura) and crocodile (baya). Who knew?! All of these photos were taken from a moving car, so they’re not the best. Sorry!

Along the way, the driver pointed out a community that had been utterly destroyed by mudslides. No one has been able to figure out how to stop the mud, so now it goes through pipes into a river that leads to the ocean. We saw flattened stone houses, a ruined mosque, and a new road as a result.

We drove through little villages and towns that became increasingly sparse and increasingly agricultural as we got further from Surabaya. The terrain reminded me a lot of our trip to Cameron Highlands. Different trees, though.

The kids walking home from school in their uniforms made me smile. Kids in uniforms are just so adorable.

Painted building that we passed: 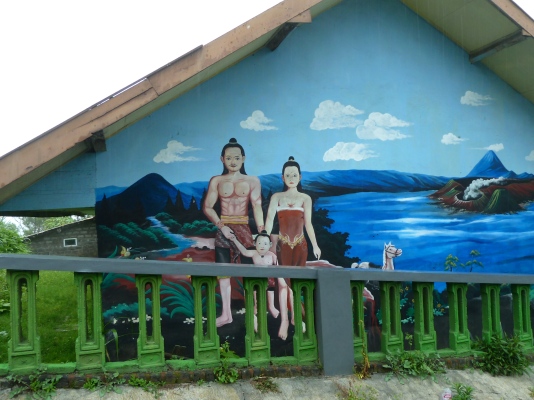 Mount Bromo is easily recognizable because it has no top. We were able to see it from one of the two lookout points on the caldera. Had the weather cooperated, we would have taken a Jeep closer to the mountain and gone exploring around and up it, but we had to be contact with gazing through the clouds and rain. Despite those conditions, it was an impressive sight: 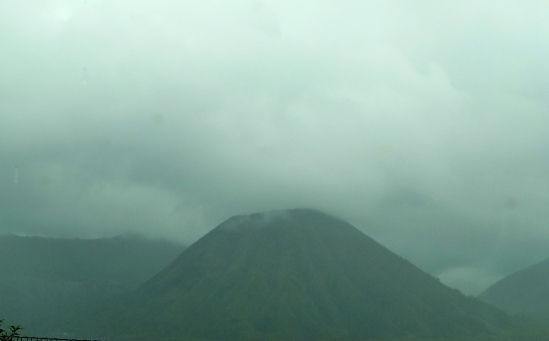 Nature is really amazing and rather terrifying if you think about it. My favorite photo from the whole adventure was this one because I think it really captures the awesomeness (and I mean that in the literal sense of the word) of Mother Nature and whoever helps her: 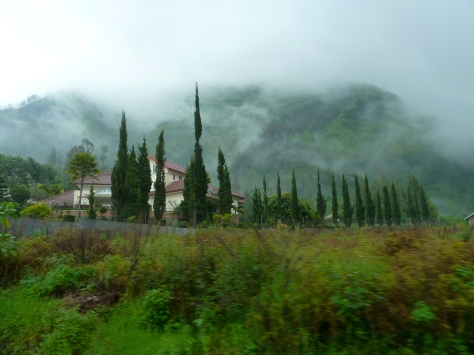 In addition to our volcanic expedition on Saturday, Mitch found an incredible Japanese restaurant inside the Shangri-La Hotel, which is probably the fanciest hotel I’ve ever been in. Our sushi, vegetable, and fish selections were excellent. There were French and Italian restaurants inside, too, and our dessert at the Italian place consisted of red wine and crème brûlée over which the server poured flaming rum. Wow!

Every so often I re-realize how wonderful it is that Mitch and I are traveling and going to new places and trying new things. We really are lucky. Thanks for such a unique birthday gift, Mitch!

Update: Mitch read this post after I published it and made a couple embarrassing corrections. Firstly, Mount Bromo is an active volcano. Secondly, the volcano in the foreground of my photos is not actually Mount Bromo; Mount Bromo is the one to the left with the white cloud-like smoke floating above it. I think I honestly cut it out of most of my photos while I was taking them, but I swear I saw it! I just didn’t know what I was seeing, apparently. Oops . . .