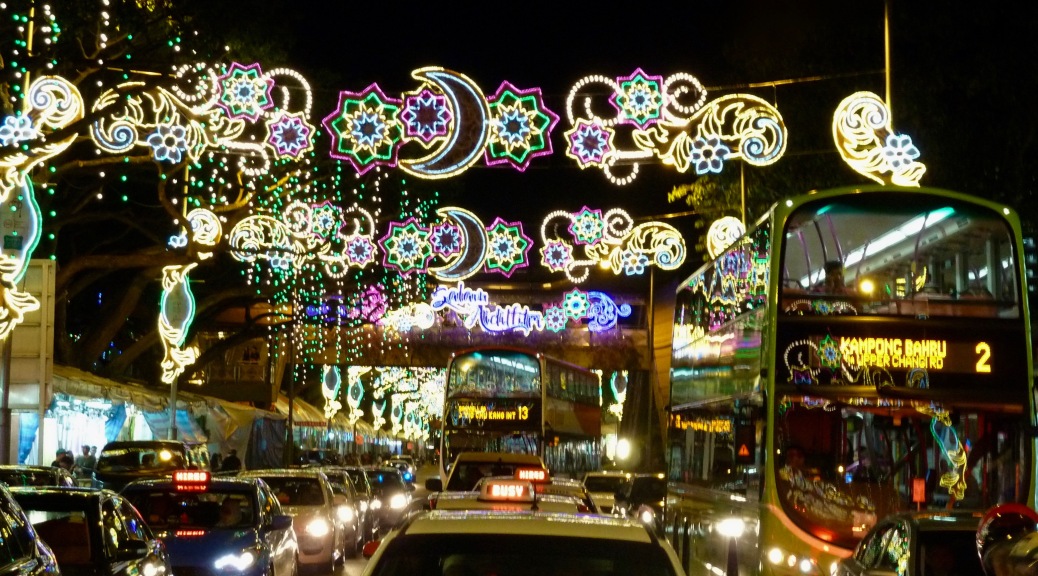 Sometimes Singapore feels like the rest of Southeast Asia. I live in Geylang, a neighborhood heavily steeped in Malay culture and historically also Singapore’s red light district. When I tell Singaporeans where I live, they’re often initially skeptical and it usually takes a second before people remind themselves that “it’s a lot better now.” And when that takes too long, people are usually satisfied once I qualify “I live in Geylang” with the specific intersection and local landmark across the street. It’s kind of like talking to people who have only experienced the New York City of the 1980s or who once visited a cousin on Staten Island (sorry, Staten Island).

Due to its Malay history and heritage, Geylang Road is also home to the Hari Raya night market that lasts through the month of Ramadan, similar to the Deepavali market that I always like visiting in Little India. I watched lights appearing for a week before the market started and wandered down the street last Sunday night to see what there was to see. 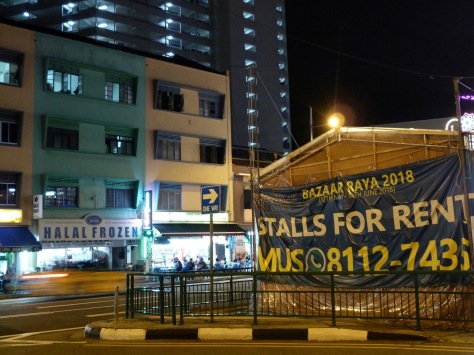 (Spoiler alert: There was a lot to see!)

The night market sells everything, as night markets do. Most of it was inside tents and pavilions under absolutely garish floodlights. There were stalls selling clothing and shoes . . . 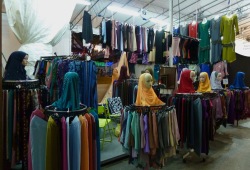 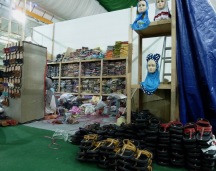 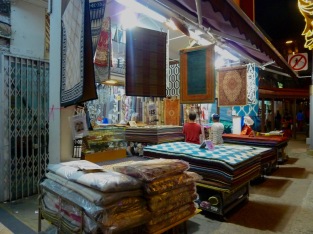 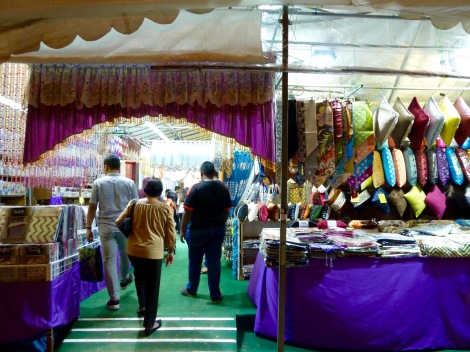 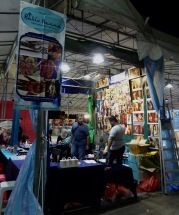 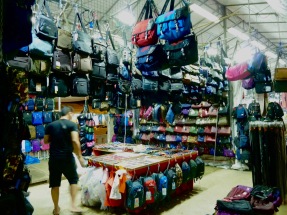 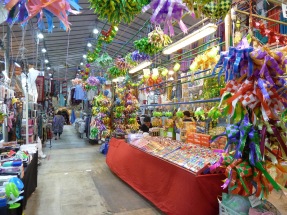 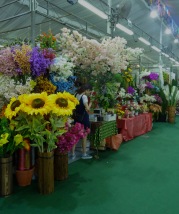 And then there was the carnival for kids with a range of prototypical carnival rides like a carousel, little roller coaster, flying animal rides, and bumper cars. The whole thing reminded me of the summer fairs at home, though without the prizewinning animals on display. 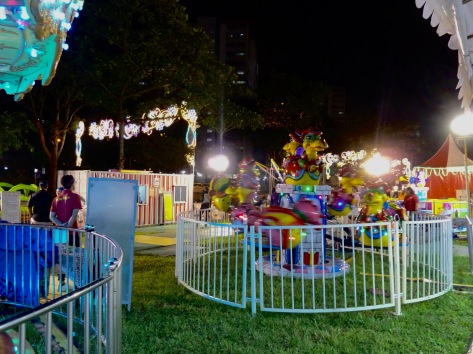 And, of course, there were lights everywhere, including the interior of Geylang Serai Market to match the exterior festivities: 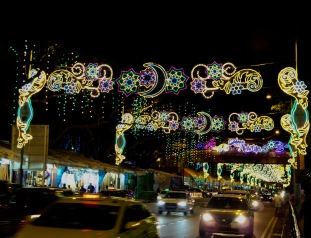 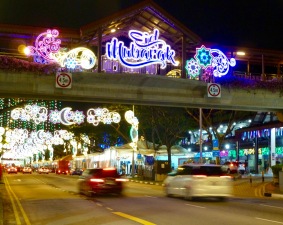 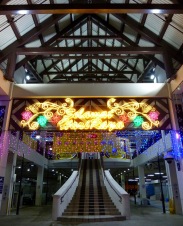 My favorite part, though, which is true of every market, carnival, fair, or general mass gathering of humanity, was the food. I was too busy with my camera to buy anything but I loved the sheer variety of offerings. One learns a lot about a people and culture from food choices, and I loved the diversity of offerings at the Hari Raya night market. Globalization at its finest. 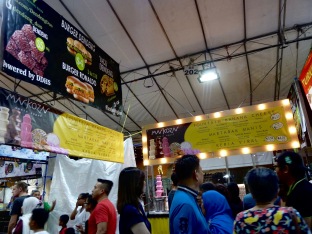 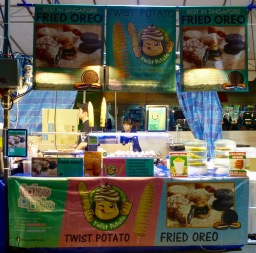 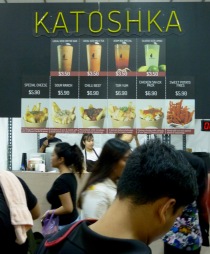 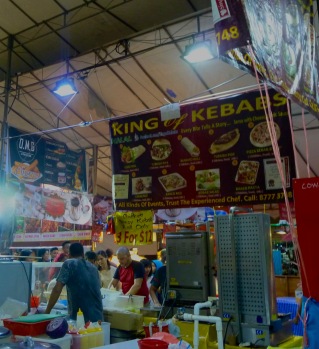 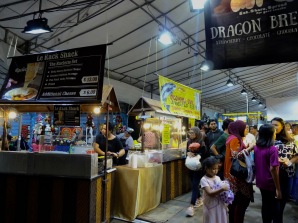 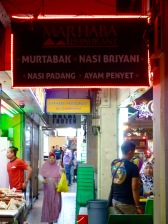 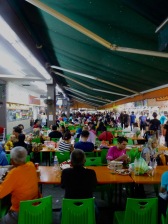 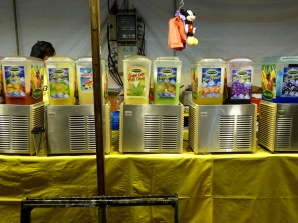 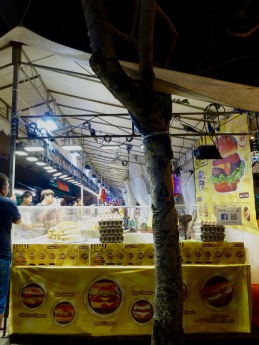 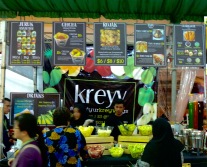 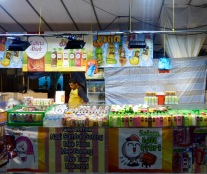 Shout out to these two guys who saw me taking a picture of their sign and couldn’t help but wave hello: 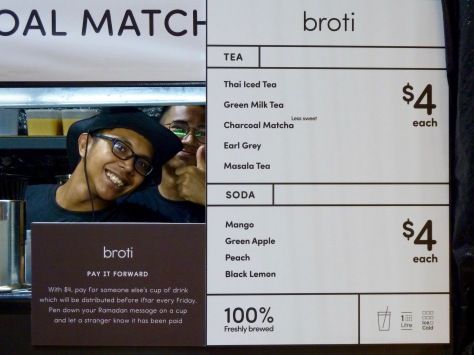 One can say a lot about Singapore – that it’s sterile, repressive, oppressive, and dictatorial are common criticisms. But Singapore is also a place where different groups are allowed to celebrate who they are and invite everyone else along with them. In my experience here, though taxi drivers and older Singaporeans often tell a different story, there’s a real love of multiculturalism here. Perhaps manufactured, perhaps gilded rather than golden, but it’s there. And I’m glad. 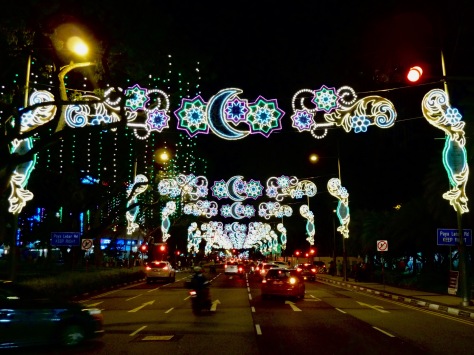 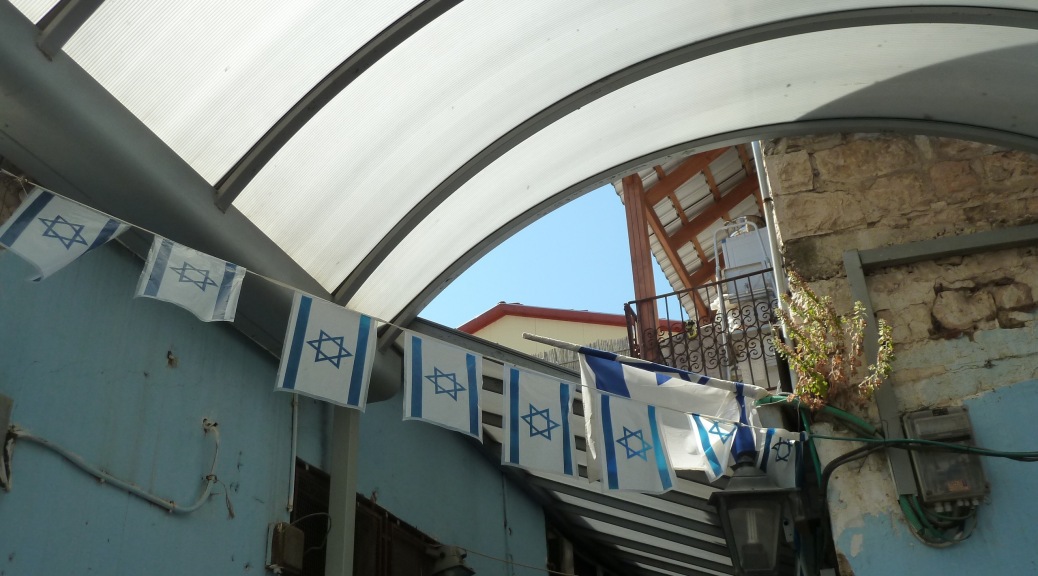 In just a few days, I’m joining the eighth graders on their two-week B’nai Mitzvah trip to Israel. I’m excited to share a country I love with students who have never seen it, glad to experience it again with colleagues who have visited often, and curious to hear yet another narrative about this land that generates so much passion from all sides.

I’ve written about Israel before and I’m interested about what stories will and will not align with my evolving views on peace and war. I’ll get back to you on that.

Recently, I heard a Hidden Brain podcast about the Israeli-Palestinian conflict that provided an update on two men featured in a previous episode. The 30-minute update, which you can listen to and understand without the original story, is here:

If nothing else, begin listening at 22:38. Podcast host Shankar Vedanatam leaves listeners with a scene from Westling Jerusalem, a one-man show that reflects the multidimensional relationships between Arabs and Israelis and provides even more complexity to a persistent problem. The soundbite from the show is about 6 minutes long and, I believe, worth your time.

There’s a lot of work to be done in this world. I’m hopeful that this trip will instill in my students  the need for such work. The world needs fresh minds and clear heads.

There are only two days in the year that nothing can be done. One is called Yesterday and the other is called Tomorrow. Today is the right day to love, believe, do, and mostly live. – The Dalai Lama

On New Year’s Eve, the clock strikes midnight and a new day starts. And that’s about it. I was about 10 years old the first time I was allowed to stay up to watch the ball drop, and I was sorely disappointed. The adults kissed, sipped champagne that no one wanted, turned off the TV, and ushered us kids up to bed. Happy New Year.

People in a variety of lunar-based religions and cultures around the world ring in a new year at different times, and follow different calendars that track different years. The Jewish new year celebration, Rosh Hashanah, takes place in the month of Tishrei (usually September or October) and this year we welcomed 5776. The Islamic calendar has changed a bit in recent years, but the new year often falls in October or November. Chinese New Year usually falls in January or February, and this year will be the Year of the Monkey.

However, most people live their daily lives on the solar Gregorian calendar, which has decided that December 31 is New Year’s Eve and that 2016 begins on January 1. Parts of the Western world adopted the Gregorian calendar in 1582; it replaced the Julian calendar, reforming leap years, leap days, and certain Christian holiday observances. As with any change, switching to the Gregorian calendar did not happen over night. Europe’s majority Catholic countries (Italy, Spain, Portugal) were the first adopters, with China waiting until the revolutions settled down in 1929. And because of time zones, we all ring in the new year at different times over a period of 26 hours. Yes, 26. Because not all countries have daylight savings time. Samoa and Christmas Island are the first countries to enter 2016 and most of the US Minor Outlying Islands are the last.*

As I wait for 2016 to cross over into Eastern Standard Time, I generally like to think about what I’ve done over the course of the past year, as well as what I hope to do in the coming year. I’m not one for New Year’s Resolutions, mostly because I’m stubborn and make commitments to myself on a regular basis (and then, because I’m stubborn, actually follow them). That being said, I have goals. While I’m not going to share them on my blog, I will write them down in my journal so they’re documented for the sake of progeny.

In the meantime, today is just another day – with a big party and a whole lot of glitter at the end.

*The information in this paragraph comes from this website. (I am forever reminding my students to cite their sources and feel guilty when I don’t do the same.)