Today is National Day in Singapore, which commemorates Singapore’s declaration of independence from Malaysia in 1965. Singapore enjoyed 23 months alongside what is now Malaysia before Singapore decided it would rather be out on its own (or was kicked out during a period of social unrest). The stark differences between the countries today definitely reflect that they were not meant to be together. Since this is Singapore’s Jubilee year, National Day is hyped up more than usual. There are parades and fireworks displays, ceremonies and festivals in numerous neighborhoods, sales on all sort of items all over the city, and promotions of all kinds. My favorite part so far is that we have a four-day weekend. Monday is a public holiday to make up for National Day’s falling on the weekend, and the prime minister declared Friday a public holiday a few months ago, so we had that, too. Majulah Singapura, as they say!

As I went about my business yesterday, I took some photos of National Day decorations. I also got a couple pictures of the promotions going on, but I felt weird about taking pictures of signs in stores; people in the US don’t tend to like that and I didn’t really want to start an argument with anyone. 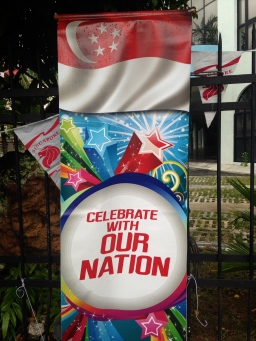 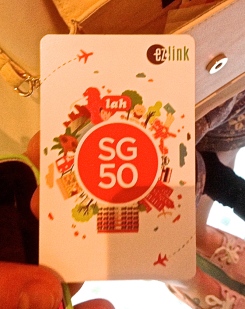 Outside a Buddhist temple near my apartment

That lion is the Merlion, a famous Singaporean statue that appears in pictures on t-shirts one can buy in Chinatown. However, an episode of The Amazing Race revealed that no one actually knows where it is!

Outside a church near my apartment

Donation to a good cause (I’m unclear on what that is) gets you a keychain!