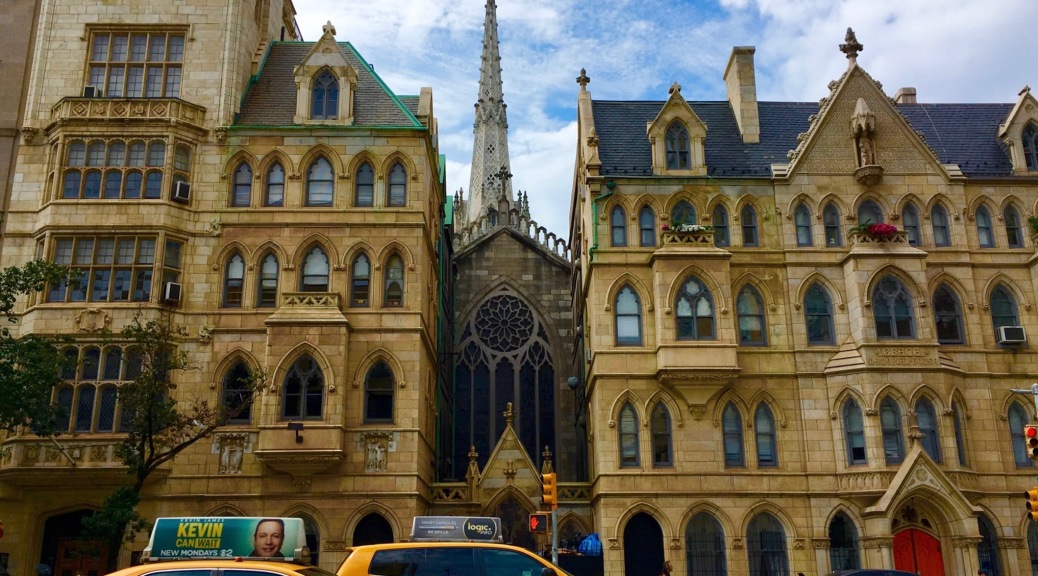 About a month after I moved to New York City, I moved apartments. Always something new, right? Presumably, however, I’ll be in this apartment until the end of the school year. At that point, it’s anyone’s guess.

Although I’m much farther downtown now, which is not terribly convenient for work, there is a lot to like about the GI Bill-era neighborhood where I currently live. Firstly, it’s like living in a park. There are trees, green spaces, basketball courts, tennis courts, actual playgrounds for kids, and a gym, library, and café. There’s also a farmers’ market on Sundays selling everything from wine to fresh seafood to organic produce, which has been absolutely delightful. Since this complex was built at a time when space was at less of a premium than it is now, my apartment is spacious and bright. I look out onto the Empire State Building to one side and more trees on the other. The kitchen could use about 50 years of updates, but it’ll do. I made vegetable paella last night, so I really can’t complain.

Since I’m too far from Central Park to run there on a regular basis I’ve taken to running along the East River. Heading north leads me through a lot of construction but also past the UN headquarters, which is just cool.

I prefer the route heading south towards the Brooklyn Bridge, however. I pass through the Lower East Side (witnessed a rap show over the weekend in which a key line was “in the LES we care for our friends”) and get pretty close to Chinatown (there’s usually some traditional music and dance and even an outdoor fitness park where I stop to do pull-ups).

My route also takes me past a community of people who make their home under one of the bridges, which makes me sad every time I pass by. Homelessness is rampant here and only increasing. It’s very visible so one can’t pretend it doesn’t exist, but no one seems to care. That’s been difficult for me to understand, especially considering the opulence that occupies many of the same spaces.

As I stumble through this city, I find myself asking seemingly endless questions about my surroundings. When I’m with other people, I ask those questions out loud. When I’m not, I take pictures that hopefully remind me to do my own research. For example, I passed a building with this display a few weeks ago: 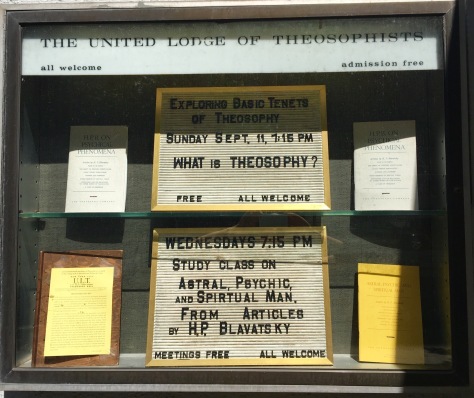 I didn’t know the answer to the question “WHAT is THEOSOPHY?” and did the thing all skeptics do before attending free meetings in which all are welcome. I Googled it.

The very helpful Merriam-Webster defines theosophy as “1)  teaching about God and the world based on mystical insight; 2) the teachings of a modern movement originating in the United States in 1875 and following chiefly Buddhist and Brahmanic theories especially of pantheistic evolution and reincarnation”. HP Blavatsky honestly sounds like someone I’d want at a dinner table at least once, but I’m going to skip the meetings for now.

Though I’m feeling rather adrift, I am trying to take the time to pause, look around, and take in where I am and what I’m doing. There’s a lot to learn about any new place and adjustments take time.

Throughout this transition, I’ve tried to  remind myself of the importance of compassion, particularly self-compassion. Some days I’m more successful than others.

Today was one of those days.

One thought on “In Motion”