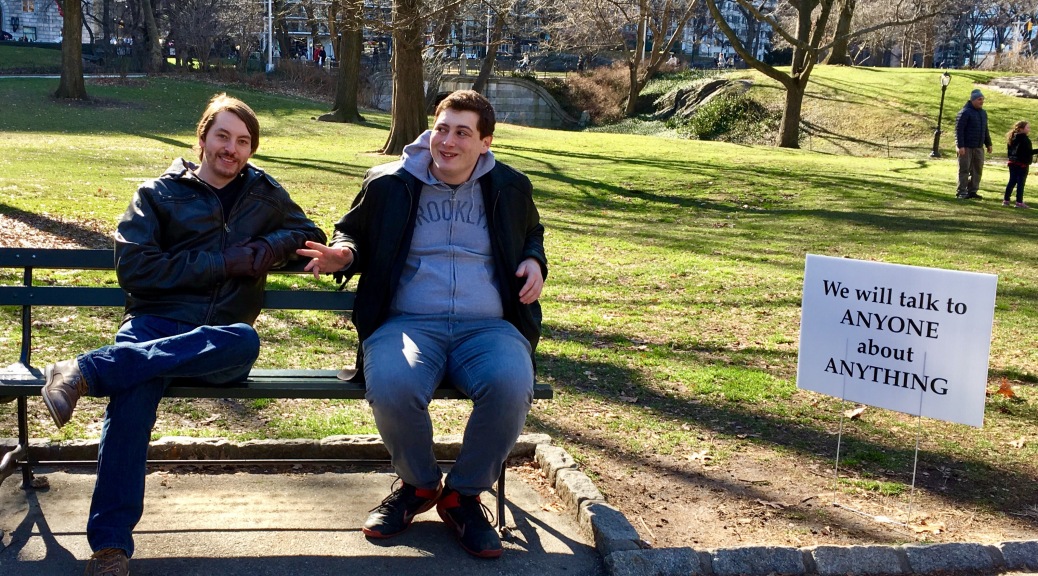 Last weekend I went for a walk in Central Park and had a fascinating encounter with three men on a bench. When I lived on the Upper East Side I used to run in the park almost daily, but never carried a camera (or phone . . . or MetroCard . . . or ID . . . wherever I run . . . at whatever time of day . . .). I often wished that I did, though, because Central Park is just beautiful. I always forget, however, that everything looks different in the winter because you can see through the trees. That means noticing all sorts of things that weren’t visible before, like skyscrapers.

Perhaps more compelling, however, was another human-made object: The sign in the picture below.

At first I grinned but walked by, not really sure if I wanted to engage in any sort of discussion with strangers. I’ve been trying really hard to meet people lately, but that still takes effort and I was feeling pretty good on my own. So I walked on by.

But I couldn’t stop thinking about that sign. Anyone? Anything? Really?

I turned around and asked the three gentlemen (yes, I know there are two pictured above) for permission to take a photo of them with their sign. After graciously posing, they asked if I wanted to sit and talk.

When I first moved to New York, my best friend told me that the best advice she could give me was to say yes to things. So I did.

For about 15 minutes, I sat between Sean on the left (or maybe it’s Shawn – apologies for not asking!) and Jared and chatted. Steve did some audio recording during our conversation to conduct a sound test for the web series they’re working on. One thing I do love about New York is that people are always up to something interesting. I always have a lot of questions about what’s happening and why, and was glad for the chance to ask some of them.

Jared asked what was on my mind and I mentioned politics because I’d been listening to a Sam Harris podcast on my way through the park. We chatted about that for a while and then our conversation switched to the experiences they’d been having when trying to engage people in discussion. We talked about how reluctant many people are to having a face-to-face conversation. People are very vocal about anything and everything on social media but talking in person is much more difficult. There’s a real vulnerability in sharing yourself with others. Despite how important authenticity is to me, which is one of the reasons I try to be pretty open on this blog, I probably would have walked away after taking my photo had these guys not said, “Want to have a seat and talk to us?”. Connecting with people requires a deeper level of engagement and commitment than a Facebook post, blog post, or tweet. It requires looking into someone’s eyes and saying what’s on your mind. That can be hard.

After my chat with Sean/Shawn, Jared, and Steve, I continued my Central Park walk with a feeling of buoyancy and euphoria. I had just sat on a park bench between two men I had never met and we’d had a perfectly lovely conversation about politics, the news, and the importance of being able to talk. I was glad to find openness and receptivity, which seem like scarce commodities in the often isolating world of New York City. The more I open up to people, however, the more I find that they do the same in return. So maybe that isolation is a shield, or a defense, for many of us. Maybe there’s a real desire for connection that isn’t being met because vulnerability is scary. Maybe the aloofness of many New Yorkers is just a mask.

I told Sean/Shawn, Jared, and Steve that I keep a blog and asked if they wanted me to share any contact information for them. So here it is! They mentioned that they were hoping someone would have a seat on the bench and just spill their heart out. So, gentle readers, if any of you want to talk to someone willing to listen, I can recommend three men on a bench in Central Park. I’m glad they asked me to stop and chat and I’m glad I said yes.

Gentlemen, thanks for making my day.

4 thoughts on “Three Men on a Bench”