I’m taking my first ever sick day today and that seemed monumental enough in my personal life to write a blog post about it.

When I was growing up, I hated missing school. I hated the catch-up required after being out for even a day, hated copying friends’ notes, hated missing the jokes and the banter. I’m also bad at sitting around at the best of times so being stuck at home has never worked for me. Right now, I’m wearing jeans and a sweater and all the jewelry that I normally wear. The only unusual thing is that my hair is in a ponytail and I’m wearing glasses.

When my roommate got home last night, she took one look at me and said, “You need to be horizontal right now.” I finally listened to her around 9:30pm. Today, I’ve spent most of my time on the couch wrapped in a heavy shawl that I sometimes use as a blanket. I’ve been reading but also doing the school prep that needs to be done whether I’m at work or not. And because I can’t stay home all day without losing my mind, I added the library and a vegan sushi restaurant that makes delicious spicy soup to my errands for the day. The more practical errands of doctor and pharmacy, I’ll have you know, also made the list.

I think much of my disdain for staying home sick stems from my childhood experience with illness. My mother is one of the toughest people I know and I was lucky enough to have her as a stay-at-home mum for my school years; she went back to work when I was finishing high school. She never let a sick child prevent her from doing whatever needed to be done that day. And when you, the sick child, had the misfortune to have walking pneumonia in sixth or eighth grade, you were deemed too young to stay home alone and take care of yourself so you might as well rally and join mum at the grocery store. So you did. (The third time I had walking pneumonia was while traveling in Norway. When I woke up with pink eye my parents finally decided we could probably skip a tour of Oslo City Hall and visit an urgent care clinic instead.)

So that’s the backstory of why staying home from work is a big deal.

I felt myself getting sick over the weekend but one of my best friends was in town so I joined the rest of the gang and explored some pretty cool haunts around the city:

I asked the bartender about the Public Displays of Affection sign on the right. If you want to buy someone a drink, you’re welcome to do it by filling out the required information on this chalkboard. How fun! I was tempted just because I like chalk.

Next door to Harlem Public is a neat spot called At the Wallace, which has board games, arcade games, giant Connect Four, giant Jenga, shuffleboard . . . and a whiteboard wall with markers in the bathroom! Couldn’t resist taking a picture of my graffiti. The ceiling was plastered with old National Geographic covers and the walls with photobooth pictures. We meant to take one but completely forgot after taking over a table in the corner that was also a PacMan console.

I’ve never been in a bar as it opens for the day, but had a delicious Irish coffee in the silent Swift before brunch on Saturday: 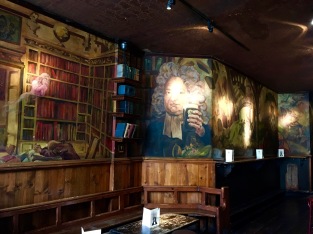 Neat mural in the East Village on the way to brunch at Vic’s:

Old firehouse across the street from said mural:

It turned out to be quite the weekend for games! We played a lot of giant Jenga and giant Connect Four but I also had fun photographing the flashing lights of arcade games at Pioneer’s, a Chelsea establishment full of couches, armchairs, and coffee tables that provides free popcorn and allows food delivery:

And then there was some solitary wandering in midtown on Sunday because, though feeling poorly, I figured I might as well do the shopping that I dislike equally while healthy:

And there you have it! A recap of my first professional sick day and the really fun weekend that led up to it. I’m on steroids for a nasty rash that is (mercifully) hidden under layers of clothing and as long as I have a cup of tea practically glued to my hand and avoid talking, my throat feels okay. My students yesterday were so helpful with my inability to speak and I hope they were as good to the sub today as they usually are to me. I’m sure I’ll hear all about it tomorrow.