Oh wait, someone already wrote that.

Hike the First: Urban
At around 3:40pm every weekday afternoon, one of my colleagues crosses off a day on the chart pinned above her desk. A few others join in for a song that might remind discerning listeners of a ditty involving bottles of a certain beverage. There’s one fewer bottle at the end of each verse. (Following? Good.)

For me, this countdown also means that there are fewer and fewer days to complete my exploration of New York City. I’ve been wanting to walk the Brooklyn Bridge for a while and mentioned it to a friend a couple weeks ago. The forecast promised (and delivered!) a dry weekend, so off on an adventure we went!

We took the 6 train to Brooklyn Bridge City Hall and followed the crowds. For whatever reason, I didn’t expect to be as high up as we were or to literally walk over traffic. It was very crowded, very loud, and a really neat sensory experience to be walking on concrete over the East River. There were skyscrapers behind and in front of us, and miles of river on either side. 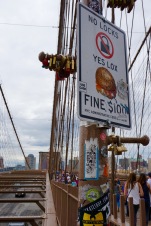 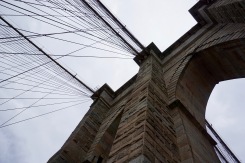 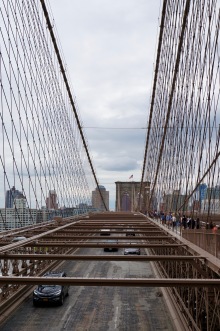 Once back on the ground in Dumbo, we decided it was time to find something to eat. We ended up at Untamed Sandwiches, which was absolutely delicious. And they compost! So that was exciting, too. Brooklyn Ice Cream Factory is right along the water and it was a warm enough day for that, so we stopped there before walking through Brooklyn Bridge Park. It reminded me of the microcreamery where I worked over the summers during high school and college. Lines out the door, ice cream machines in the back, smells of milk and sugar, cash only. Delicious.

Brooklyn Bridge Park leads through a garden right up along the river, providing more views of Manhattan: 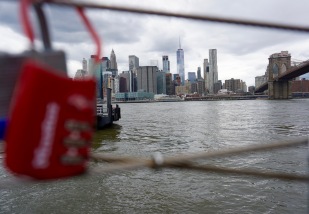 I’ve spent very little time in Brooklyn and I have no excuse for that since I live one stop from Brooklyn on the L. It really does feel like a completely different city and that’s enjoyable on its own. The streets have real names, the elevation of the land actually changes, the buildings are lower, and there seems to be more space in the sky. Brooklyn’s neighborhoods are as distinct from one another as Manhattan’s and I don’t know them nearly as well as I’d like to. Now that the weather is nice enough to do some real exploring, it’s time to change that.

Hike the Second: Nature
After wandering through an art show on University Place on Sunday and seeing beautiful photographs of nature, I wanted to find some. I sent a message to my urban hiking buddy and headed to Cranberry Lake Preserve in Westchester for a change of scenery.

The first thing I noticed, much like when we explored Silver Lake Preserve, was the air. It smelled fresh and earthy, clean and new. That I even noticed tells me that I’ve spent far too much time in the city.

We followed a couple different trails to see where they’d lead and I climbed some logs because it’s fun to be tall, but I’d really classify this as an easy walk rather than a hike. Hiking involves mountains and sweating and legs that are satisfyingly achy when you’re done. This was just pretty, which was perfectly fine with me.

There were a lot of fallen trees that looked as though they’d been there for decades . . .

I love all forms of exploring and being outside. I don’t have that much time left here to do it and there’s a lot to do!

Happy trails, wherever they are! 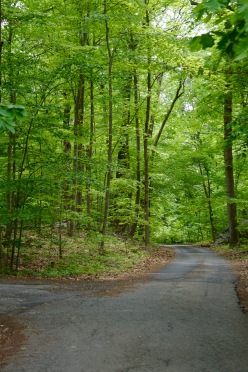 One thought on “A Tale of Two Hikes”